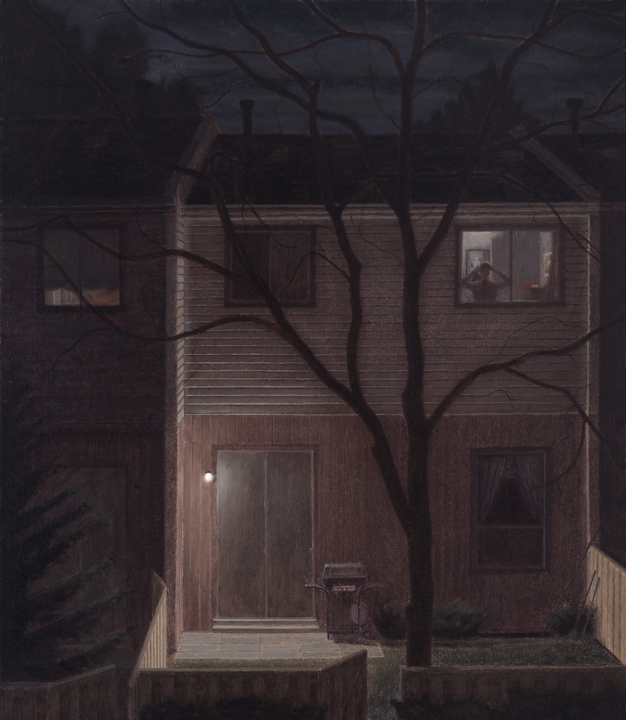 On March Break, the Art Gallery of Mississauga and the Mississauga Library System hosted TELL ME A STORY: An Art-Inspired Creative Writing Workshop for Youth. Participants, aged 10 – 19, were asked to choose from a selection of works from the AGM’s Permanent Art Collection, or the AGM’s current exhibition, Lila Lewis Irving: Con Spirito | Retrospective. The AGM provided captions for some of the works, to inspire imaginative storytelling. Participants were given 30 minutes to come up with their stories.

Jorge Correa, The Watcher
From the Art Gallery of Mississauga Permanent Art Collection

The Watcher
By Khaled Hassan

April 16th 1998 was a dreary, dull and grey day. There was a slight chill, but all you felt outdoors was the heavy torrential rain, falling in sheets like black see through curtains that draped over my quiet neighbourhood. I lived on 65 Creditview Street, which was a long street with identical town houses on either side. It was the type of neighbourhood that looked like it came straight out of housing estate post card during the day, with the sun shining on bright green lawns and white washed picket fences. However, when the inevitable shadows of the night came clutching with hungry claws, our neighbourhood turned into a setting somewhat similar to that of Nightmare on Elm Street.

It was a Saturday night and I had nothing to do thanks to the weather. Giving up on the 3000 piece puzzle I’d been attempting to put together, I walked up to my window to see if anyone had dared to venture out in such weather conditions, hoping deep down to find anything remotely interesting. I looked across the street at the house opposite ours. It had been empty for quite some time, now that I think of it, no house of our street had been unoccupied for this long for as long as I can remember. It was quite the oddity in our street, with its lawn overflowing with unkempt weeds and the trashcan bursting with rotting garbage no one’s bothered to pick up, but worse of all was the stench, a pungent sickening odour emitted from the house that seemed to bring death to whatever it touched. My eyes slowly traveled from the lawn and up the cracked, yellowed crevices of the wall, noticing the peeling paint of the front door and the windows which had gone opaque with dust and grime. Finally I reached the two windows of the top floor, when the most ominous observation yet came to my attention, the dimmest of light reflected off the windows as a car passed by and in that instant that part of a second the house came to life, and with a grimace and menacing stare, the house watched back…