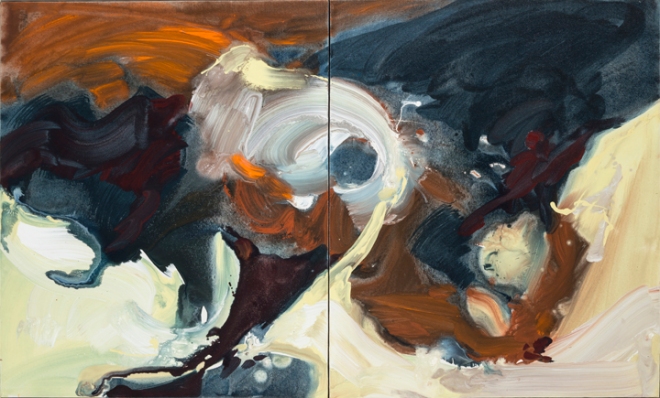 On March Break, the Art Gallery of Mississauga and the Mississauga Library System hosted TELL ME A STORY: An Art-Inspired Creative Writing Workshop for Youth. Participants, aged 10 – 19, were asked to choose from a selection of works from the AGM’s Permanent Art Collection, or the AGM’s current exhibition, Lila Lewis Irving: Con Spirito | Retrospective. The AGM provided captions for some of the works, to inspire imaginative storytelling. Participants were given 30 minutes to come up with their stories.

Otello was a man who had everything a man could want. He had a beautiful wife and talented children. He was rich and famous, but it wasn’t enough. Otello started to spend late nights out, trying to earn more money or advertise his family for their beauty and talents. He wanted his children to be famous and his wife to dazzle the world with her looks. The only problem was that his family constantly refused his wishes. They wanted to live a simple peaceful life.

Otello quickly regretted forcing his family to do things they didn’t want to do, that late autumn night. The house was on fire, and everyone was inside except for Otello. The whole house was already doused in flames when he got home, but he still ran in and tried to save them. He tried but failed, only gaining horrible burns and permanent scars. Otello had a second chance at life, but he didn’t want it. “Curse you God, why them?! Why spare me?! What did I do to deserve this?!” He screamed and cried every day and every hour.

Finally, after many months, God showed his pity on him. He sent back Otello’s family from the afterlife, but told Otello that he had to change his selfish ways and spend time with his family. If he didn’t, God said he would take everything away again, including Otello.

Otello was overjoyed when he saw his wife and kids running up the steps to their home.

From that day, Otello spent all his time with his family and did not pressure them to do anything. He didn’t want to lose them again so he stayed true to his promise. But everybody makes mistakes.

On the wedding anniversary of his wife and him, he took her for a drive on the countryside. They parked on a hill that overlooked their whole estate. “I’m so glad I got you back,” Otello said to his wife. “You’re even more beautiful than you were before.” She smiled at him but didn’t say anything. It was a beautiful sunny day and all Otello could think about was his wife’s unused beauty. “You know you would look beautiful on a billboard or commercial with this as your backdrop” he said. That was enough to ruin everything. He mentioned the media and her beauty again, and she didn’t like it. She immediately hated him for it, and God felt her anger too.

Suddenly a big storm blew in. The once bright white clouds turned red and orange and the blue sky turned dark purple. A whirlwind of fury and anger swept in and took everything away. Otello was left, but only to see the wreckage. Otello was actually relieved when he too was taken away and he never saw happiness again.