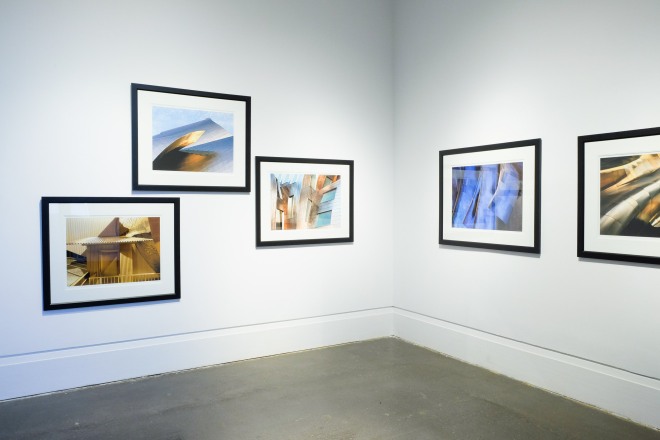 Artist Glen Jones presents a unique perspective on Frank Gehry’s architecture in his photography, at the AGM XIT-RM until July 1. In this guest post for the AGM blog, Jones writes about his fascination with Frank Gehry’s work.

The world of Frank Gehry’s is one that provokes thought. His contemporary biomorphic designs exhibit awesome presentations that demand the viewers attention. To date I’ve photographed six of his unique buildings and I’m half way through my three year project which will include twelve buildings in five countries internationally. My show at the Art Gallery of Mississauga exhibits four of these ad-hoc designs.

All have their individual and unique personalities but my favourite so far is the Experience Music Project Museum, located in Seattle WA. The museum exhibits the rare artifacts, hand written lyrics, personal instruments and tour films of both Seattle musicians, legend Jimi Hendrix and American rock band Nirvana.

Frank Gehry designed the 400 ton structure with over 21000 aluminum and stainless steel plates that display a fusion of multiple shapes and forms combined with a kaleidoscope of reflecting colours from objects in its surrounding environment. Gehry wanted to convey to his viewing audience the constant graduation of lighting conditions that visually appear when seen from different angles. His intent was to remind us that the commonality between the everlasting changes of light upon his sculpted buildings and the constant evolution of both contemporary music and the ever changing pop cultural.

Two of the images that are on display in the gallery titled Titanium Waves and  Orion 4 are true examples of my interpretation of what Mr.Gehry’s intent was. Both images express the distinct differences of how light changes the overall appearance of the targeted areas although they were photographed within meters of each other. Again these images were basically taken about an hour apart yet the colours and hues appear to be so different. Orion 4 presents blue as the dominant colour while Titanium Waves reveals more of the natural colours of the weathered stainless steel plates. The reason is that Orion 4 reflects the monochromatic blues from the sidecar of a futuristic monorail five metres above it. I waited a day and a half for high overcast lighting and how it appeared on various sections of the museum. Marking these areas with biodegradable chalk. I then recorded in each location what lens gave me the best angle and desired effect.

Scouting also allowed me to mark the sidewalk, as to whether it was a morning, afternoon or evening shot. I learned this technique from a successful architectural photographer. He explained that you increased the odds of getting the image you wanted without wasting time deciding which angle, lens, aperture or tripod level you were going to use. Doing this allowed me to focus on the task at hand without worrying about the many factors that can make or break an image under difficult lighting conditions. I’m honoured to photograph the artworks of a master architect and fellow Canadian.