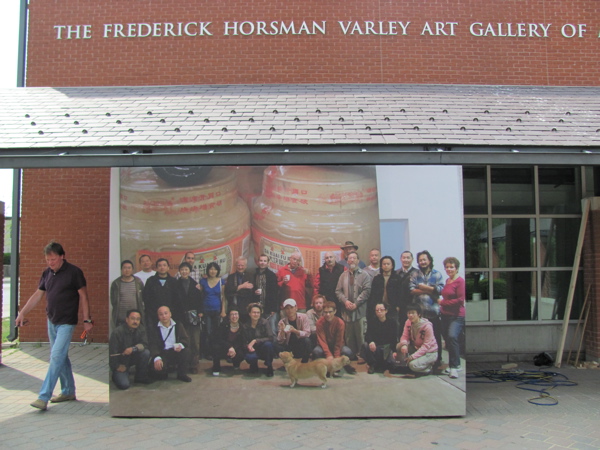 Cathy Busby lives in Halifax and has been involved in numerous projects in China, including an exhibition at Pickled Art Centre, Beijing, in 2010. She is currently artist-in-residence and teaching at Emily Carr University of Art and Design in Vancouver.

Pickled Art Centre Opening (2008) with Jinkelong came about in Beijing when an Austrian artist, Jasmin Ladenhaufen, suggested we line up for a group photo at the end of the evening. Three years later, I found this image in my archive when thinking about what I could contribute to the Da bao exhibition. There was something significant that I saw in this photo and wanted to sustain. I like the way it shows an adhoc community gathering, like other kinds of group photos of family occasions or school class pictures. And I liked that my artwork, Jinkelong 2008, became a backdrop, something that has happened repeatedly in my practice. I made the documentation of an art event in China become an artwork in itself for this exhibition in Canada.

I met Li Gang within the first few days of arriving in Beijing in September 2007 at an opening at his gallery, Pickled Art Centre, formerly a pickle-making factory. The space was cavernous, relatively expansive, minimally renovated and tucked away in a village-like area, part of the sprawling suburbs of Beijing. In a country renowned for its heavy administration, here was this casual artists’ counter-culture. Li Gang said, “I think we’ll be having a show in mid-October. Would you like to be part of it?”

Li Gang showed us that it’s possible to live under the regime reasonably freely, exploring ideas and mixing with artists from other parts of the world. Many of us could not speak to each other, but we still found common ground at the opening. We had a mutual desire for friendship and to share ideas over tea and beer, even when limited to pointing at words in a phrase book, smiling and nodding. This picture speaks to an example of artists’ counter-cultural practices that are alive and well in China.

(Da bao)(Takeout), contemporary artists attempt to locate a cross-cultural and social dynamic between China and the West, is on view at the Art Gallery of Mississauga Nov 15, 2012 – Jan 5, 2013. FREE admission! Details on our website:http://www.artgalleryofmississauga.com/