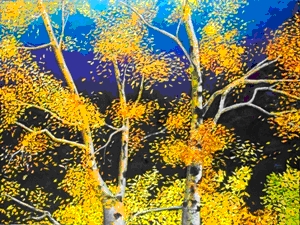 The piece I have in the show is titled ‘Birches at Dusk’.  I was inspired by a black and white photo of a birch grove that my husband Peter showed me.  I love colour and texture, so this being my second painting of birch trees – and I wanted to experiment with a lot of texture and complimentary, high intensity colours.

2. How and when did you first become interested in creating art?

My first attempt at painting was a couple of years post retirement ( Autumn 2005). I studied at the Michael Spillane Studio of Fine Art in Mississauga, then took 2 drawing courses with Brian Smith at VAM, and 2 courses with John Leonard.  I am now a member of several groups.

3. What do you think of the art scene in Mississauga? Where do you see it heading in the next ten years?

4. What advice would you give young people who want to become artists?
Creating Don’t be afraid to try new media and techniques.  There are some great teachers – ask around to find out who you would find most informative, a person who’s work you admire would be able to steer you in the right direction.  Work as often as possible.

See Donna Saull’s Birches at Dusk at the Art Gallery of Mississauga in the VAM 33rd Annual Juried Show until February 26th.